Every year, God speaks to me about what He wants to do in my life in the upcoming year. This last year, He wanted to renew life and promises in me that He had already spoken, but that I had let go of. And in the year, I went through many circumstances that made me fight to renew my belief. It became a year of me learning to believe again.

It is not surprising that God is continuing down this path for me in 2010. This next year, I am being called to sink my teeth into His promises. Earlier this year, I saw this picture in a store window, and made it my cell phone background, because I knew it was something I needed to be reminded of daily... 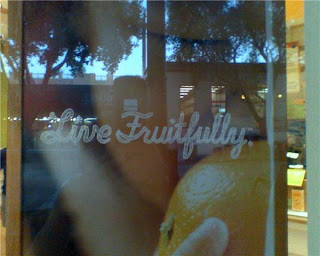 I love how this little girl is just biting into the fruit...it is the image that God brought to mind as He showed me the next step I'd be taking. It is one thing to believe in His promises. It is another thing to sink your teeth into them. "O taste and see that the LORD is good; How blessed is the man who takes refuge in Him!" Psalm 34:8 I am excited to begin to take hold of what God has been speaking over my life. I know it will be a daily decision, and a daily struggle as God transforms the poverty mindset I have long lived in. But I know I will taste and see that the Lord is good to me. He gave me the verse I quoted in my Christmas post as another encouragement...that I would be blessed if I believe that God will fulfill what He has spoken! Let's go 2010! I am ready. Happy new year, and may you be blessed as you kick off 2010!
Posted by Unknown at 6:06 PM No comments: 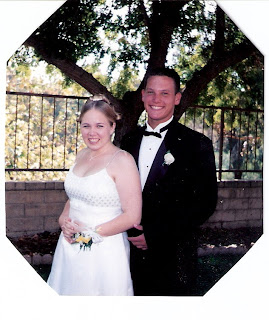 Flashback to high school. I went to four high school dances, including prom, but I was never asked. Imagine a 17 year old girl wanting to go to prom, and time passes by...no one asking. I ended up asking a sophomore to go with me, just so I could go. For years before this, and even a few years after, I believed that if I wanted to date a guy, I needed to do the pursuing. Otherwise, it would not happen. God began to show me that I needed to change my perspective and learn to be pursued. And it has been a journey...sometimes it feels like it has been a loooooong journey. But I have been waiting.

Why the flashback? Why bring it up now? In two weeks, I get to re-live "prom" thanks to two of my friends who are dating. The guy is re-creating prom for his girlfriend since she has never gone. Because I am a close friend to both, they want me there. Here lies the dilemma. It requires a date. Insert flashback here. Maybe you can even insert some of that horror "ree ree ree ree" music too. Haha. I have been single for ten years. And still have never been asked. I don't have high expectations that I will be asked to this prom by the man of my dreams and be swept away...that would be nice, but honestly, not expected. BUT I would like to be asked. Even if it is just by a friend. The last time I faced this experience was about 5 years ago. I did not get asked. I wanted to go, and so did several of my girl friends. We ended up going as a group, and two of the girls dressed up like guys, but girl-ified. The only saving grace for me that night was that a dear friend, who had asked someone else to go, asked me to dance...not once, but twice. This same friend has built a determination in me not to settle for anyone less than a gentleman.

Truthfully, I don't really even want to go. Why? Because I don't want any guy to feel like he has to take me, and I don't want to go unless I am asked. That's a lot of pressure on a situation...and to me, it just does not feel like it is worth it. I am not sure how it will all pan out, because I want to go and be there with my friends. I just don't want it to end up feeling like high school all over again. One day, I won't have to worry about this. One day, I will have a husband to be my date, and he will have asked me. Until then, I wait...and hope that this all works out.
Posted by Unknown at 4:37 PM 3 comments:

I just wanted to wish you all a very Merry Christmas! Enjoy your family and friends, and remember that Christ is the reason we celebrate! He has changed my life, and at Christmas, we remember that. He came to set us free and give us grace...which I continue to need in an abundance.

I am so thankful for what God has done this year, and look forward to all that next year will bring! Lots of adventure and fulfillment of dreams...

"And blessed is she who believed that there would be a fulfillment of what had been spoken to her by the Lord." -Luke 1:45
Posted by Unknown at 12:00 PM 1 comment:

rough around the edges

I feel like life has been a little rough around the edges lately, and while I know this feeling will most definitely pass, I feel quite consumed by it at the present time. I feel worn, like a weathered book left out in the sun or the rain or both. I feel sad in waves, in the quiet moments of the day. I feel like I am going going going...because work demands it of me. And so I am tired and would rather rest a while. Meanwhile, my heart is crying out to keep going strong...but at the same time, it feels like there is little left to give.

This will pass. I am a mix of emotions from the season, and exhaustion from work I am not used to doing. I spent Tuesday night alone on my couch because I was too tired to move. I was hoping someone would be home, but instead the time passed, and I kept myself distracted. And all the distraction really does is cover up the feeling of being alone. I haven't let myself cry yet...until now. It is as though writing draws it out of me...the sadness that words cannot describe. That does not make a lot of sense, but I guess the process of slowing down just enough to let it spill out is enough.

This time of year is a mixture of strong emotions for me. I love it, and yet at the same time, feel overcome by it. That is what grief does. And in a few days, I will pick myself back up and keep going...a little stronger and a little less burdened.

I know I am loved. I am surrounded by so many people who made it a point to check in on me. And when I feel like no one else in the world understands exactly what I am going through, God reminds me that He knows and He has not forgotten me.
Posted by Unknown at 9:14 PM No comments: