This last weekend, I went on a short women's retreat in a lovely place outside of the hustle and bustle of life.  During the retreat, the owner of the place gave us the opportunity to check out their snakes...which included rattlesnakes and an 11 foot python.  The python was in a pretty good mood, so many of us were able to hold him...including me.  At one point, about ten of us stretched him out, and I had the duty of holding the area closest to his head.  I wasn't really freaked out until this moment.  I quickly realized that should he wish to attack me aka bite me, he could.  He didn't, thankfully, but nevertheless, the idea that he could stuck with me.

I was falling asleep that night, and was having vivid thoughts/dreams about snakes biting me.  It filled me with fear so much that I awoke and couldn't stop thinking about it.  I then remembered something that the owner of the snake said, that snakes can only strike a short distance from where they are bent.  Realizing, of course, that I was nowhere near any snakes at that moment helped me to calm down.  I realized though that my fear of being attacked was less of an actual fear of snakes, and more of a spiritual thing.

It's not a coincidence that God chose the snake to represent Satan.  His ability to attack, though fierce, is limited.  He can only attack those close to him.  The thing is, we often allow him to come close...sometimes openly, sometimes without realizing it.  We do it when we choose fear instead of faith.  We do it when we choose doubt because it feels easier than believing for greater things.  We do it when we choose to do something we know isn't right, but we want to anyway.  In those moments, we bring ourselves close to an enemy whose ability to attack increases the closer we get.  Jesus shows us how we ought to respond in those moments that the enemy draws near.

"Then Jesus was led by the Spirit into the wilderness to be tempted by the devil. After fasting forty days and forty nights, he was hungry.  The tempter came to him and said, “If you are the Son of God, tell these stones to become bread.” Jesus answered, “It is written: ‘Man shall not live on bread alone, but on every word that comes from the mouth of God.’” Then the devil took him to the holy city and had him stand on the highest point of the temple. “If you are the Son of God,” he said, “throw yourself down. For it is written:

“‘He will command his angels concerning you,
and they will lift you up in their hands,
so that you will not strike your foot against a stone.’”
Jesus answered him, “It is also written: ‘Do not put the Lord your God to the test.’” Again, the devil took him to a very high mountain and showed him all the kingdoms of the world and their splendor.  “All this I will give you,” he said, “if you will bow down and worship me.” Jesus said to him, “Away from me, Satan! For it is written: ‘Worship the Lord your God, and serve him only.’” Then the devil left him, and angels came and attended him." Matthew 4:1-11
Regardless of whether we have let the enemy close to us or if he's found his way by other means, our response should be the same...lean on the word of God, the TRUTH.  Against that, the enemy has no power.  His attack holds no ground when confronted by the truth.  It's our best weapon. 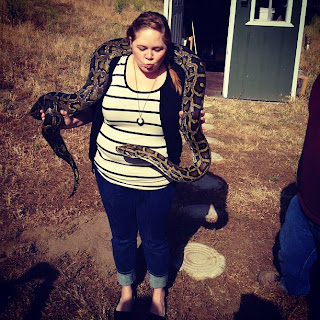 Anyway, all of that is inspired by my most recent run-in with a few snakes.  I am pretty sure that I'll be avoiding both kinds...physical and spiritual, even though the chance to hold such a large and powerful animal was quite the experience!
Posted by Unknown at 1:17 PM

Love that picture. And bravo for holding such a big snake.

Great analogy. I know someone who has constant snake dreams...more like nightmares and I believe (and so do they) that sometimes it represents the spiritual struggle they're going through.

Its all so fascinating.

But yes! cling to Him and His truth! I could use more clinging in my life and less fear/doubt!

Oh my gosh, that would scare the heck out of me!! You are awesome!